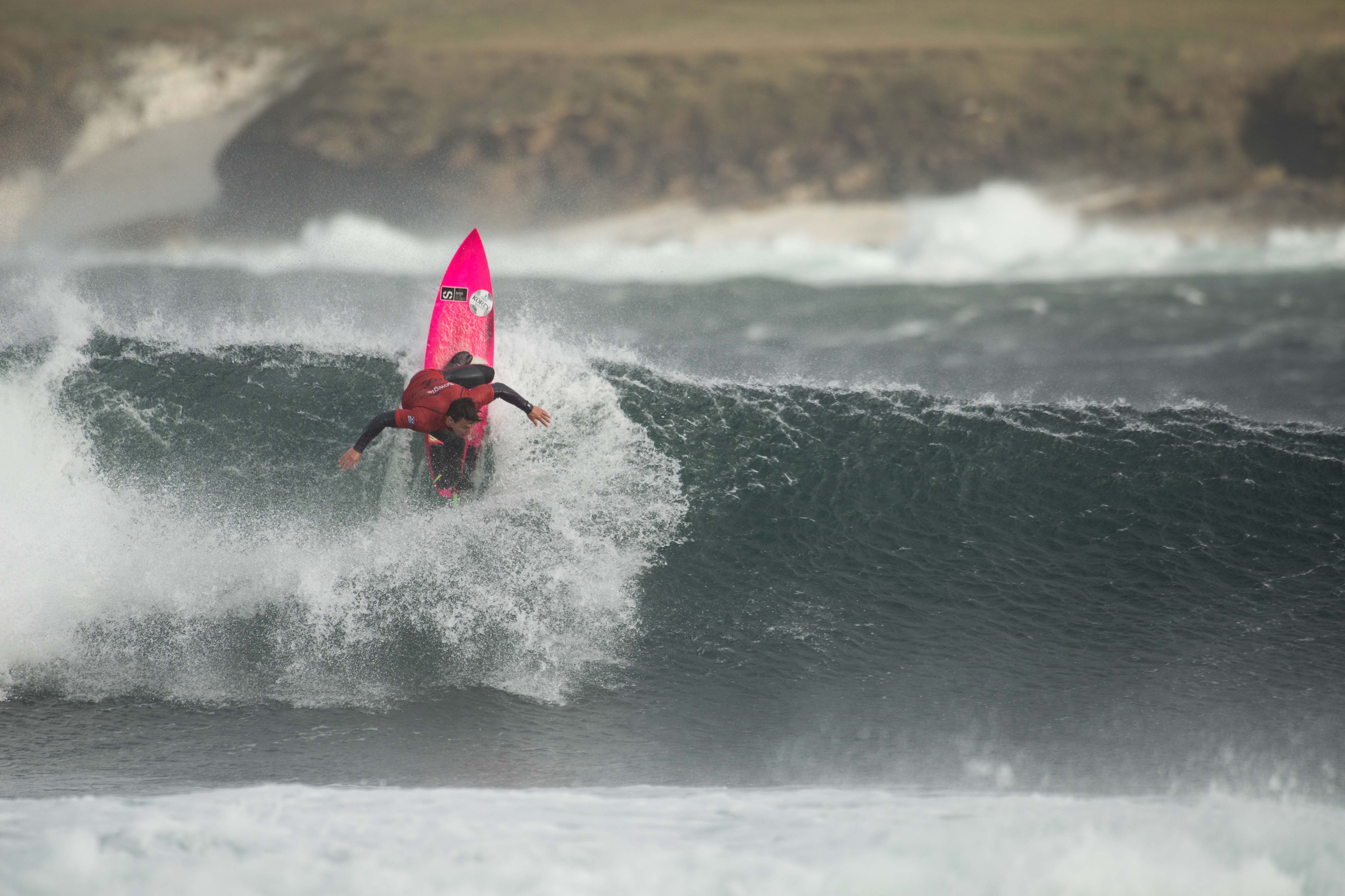 Day three & Thurso East was caught in a heavy cross/onshore wind (dubbed locally as “fresh”) causing the UKPSA Officials to carefully assess the conditions as Luke Dillon, Jay Quinn & Miles Lee Hargreaves tested their mettle in a free surf before the competition. With our Open competitors being blown skyward each time they reached the wave’s lip, the call was made to relocate to an impressive 3-4’ fun, left-hand break at Sandside.
Seated under the watchful eye of Dounray nuclear power station, our first round of Open surfers hit the water. Early eliminations saw Scottish local wildcards; Mark Boyd, Chris Noble, Chris Clarke and Andrew Robertson drop from the lists alongside some of the less experienced surfers from the UK Pro Surf Tour, but through to the finals; South Africa’s Jacob Mellish with Bude surfers Reubyn Ash, Miles Lee Hargreaves & Newquay’s face of Korev, Luke Dillon.
We returned to the final of the Fistral Beach Under 18 Boys before this stacked up Open Final which saw Barnaby Cox & Stanley Norman from Bude, surf against Noah Capps & Logan Nicol. Smart surfing from Logan saw him score a good first wave, only needing a small score to take the heat from a flurry of waves by Barnaby Cox, leading with a 7.1 wave who thrilled with some well-timed snaps throwing spray for the judging panel, Stanley kept up the pressure by attempting to pull off a 360 manoeuvre at the tail of each wave & Noah also keeping pace but left requiring a combo score to move up, making for an exciting heat. A score for Logan, changed the result however as a huge 8.43 dropped in for our surfer in blue and takes the win over Barnaby Cox.
The Open Final faced a slight change in the wave period as the sets slowed making our surfers compete rather more tactically than before, with some early challenges by the surfers to outmanoeuvre each other in the line-up and the waves favouring those who broke free from the tight group to score. Luke Dillon took the early lead with his powerful style and dialling in those clean wave sections down the reef, with Miles in hot pursuit. S.A surfer Jacob Mellish threw into the mix, a smooth, fluid style which earned him scores keeping track behind our heat leader and pushing our Bude riders, Reubyn and Miles to quickly work on those scores to climb the ladder.
Hoots from all our Thurso Surf Festival and horn blasts from the vast fleet of vans accompanied each impressive ride as our ultimate heat ended with a win from Luke Dillon, Reubyn Ash claimed a second, Miles in third & Jacob Mellish ending in fourth place.
Presentations took place with the stunning backdrop of today’s pumping swell, with the wind howling through as Phil Williams from the Christian Surfers (who have done such an excellent job this week of keeping us all warm and fed) presented the Under 18 Boys prizes first, leaving the podium laden with some hefty Nerf weaponry from our Title Clash of the Groms Sponsor.
Next up were our Women’s Open winners from yesterday’s surfing, Crowning our four times Thurso Champion and the UK Pro Surf Tour Champion Lucy Campbell, Emily Williams in second, Emily Currie in third place and Francesca Pioli in fourth.
& Finally, the Men took to our impromptu stage for Luke Dillon to be crowned Thurso Champion.
Thank you to the Scottish Highlands for this amazing leg of the Tour, the Scottish Surfing Federation and the Scottish surfers for sharing their waves with us, to the Christian Surfers for their fantastic help and catering for our production team and to all our sponsors who make the UK Pro Surf Tour possible; Nerf, Korev lager, Fistral Beach, The Surfing Sumo, Greencoat UK Wind, Foundation Scotland & the Stroupster community fund.
& lastly thank you to all our followers who have been tuning into our Live-feed at home, broadcast by Stream Freedom Ltd. See you at our next event.
Results
Fistral Beach Under 18 Boys
1st – Logan Nicol
2nd – Barnaby Cox
3rd – Stanley Norman
4th – Noah Capps